If you’ve followed my posts for a while, you’ll know that I didn’t get into reading YA fiction until I was in my 20s (*coughs* mid-20s *coughs*). I’d read mainly literary fiction, crime, and thrillers before then—as is quite common for us Brits (I used to love fantasy as a child, though). The first YA novel I read was Twilight (if you’ve read last week’s post, you’ll know how I ended up buying that book), and it was written in first person POV, past tense. It was the first time that I read about a character looking at her face in the mirror and describing it for the reader. It was done well—Bella wasn’t just listing off her features—and I thought it was pretty cool, actually.

Almost every YA novel I’ve picked up since then that was written in first person POV, has had that scene: the MC looking in the mirror and describing their looks (I’ve seen this in both indie and trad pub books). And sometimes, the protagonists did just list their physical attributes in one chunky paragraph. Sigh.

Am I the only one that thinks this method of describing the protagonist is overdone? In fact, it’s not something we do when we see our reflection. As we scan our faces in the mirror, we don’t go, “I have big round eyes, that are slanted upwards—a homage to my mum’s Asian roots—and my eyebrows are so dark, neat, and beautifully arched that they look like they’ve been filled in by a YouTube beauty guru.” When writing in first person POV, the inner monologue has to feel as natural as possible and reflect how we actually think. Minus the “ers” and “ums”, of course—that puts a lot of readers off.

“But Neha,” some might say, “how else is my protagonist going to tell the audience what she looks like? Even bestselling traditionally published authors do this, so it can’t be that awful.”

It’s overdone, though, isn’t it? And if I find it annoying, chances are there are other readers out there that feel the same way.

So, in this post, I’m going to share my top three writing hacks for describing your MC in a first person POV novel. (Will work for third person, too, of course). 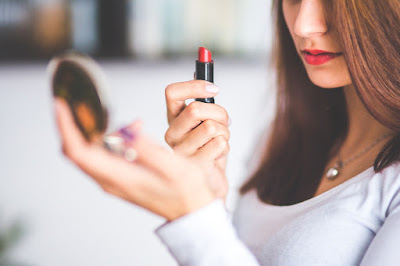 In contemporary romance novels—say a love story between Person A and Person B—it’s not rare for authors to write from both of their protagonists’ POV in the first person. Therefore, instead of each MC describing themselves, you can actually have A and B describe each other in their respective POV chapters once they have met. It’s not the end of the world if those descriptions don't appear in the first chapter. Though, arguably, the two MCs should meet quite early on in a romance, as per the age old writing tip that urges you to get to the action and plot quickly. So, you will probably get those descriptions out of the way pretty early on.

In the first book of my Soulmates Saga, Mukti’s colleague Henrik (not the male MC, Jamie) is the one that describes her to the reader when he first sees her—and it makes sense; when we meet someone new, we do take in their appearance, especially if we find them attractive, as Henrik does when he first meets Mukti. I know this series wasn’t written in first person POV (I wrote it almost as though it was: biased third party narrator) but I’d like to give you an idea as to how Person B could describe Person A to the audience:

“...Henrik heard the clicking of heels against the marble floor. Because he’d been leaning on the counter, he saw her pointy high-heeled boots first. Then, her thin but shapely legs. A knee-length, double-breasted black coat with a belt at the waist, a nice neat collar. The girl walking towards him had a good figure and looked very smart. Definitely a fellow newbie. When he saw her face, he felt his lips part ever so slightly. She was quite beautiful.”

Henrik goes on to admire her facial features next. I wrote this scene as if a camera was filming Mukti’s entrance into her new office building, the lens moving up slowly from her feet to her face, and then zooming in on the key features, as Henrik lifts his head up to take her in. (My stories are quite visual to me).

“But Neha,” I hear you say, “I’m only using one POV in my entire novel. She’ll have to look in the mirror and describe herself.”

Not necessarily. Consider writing hack no.2:

Your MC can still describe herself, my friend, but she doesn’t have to look in the mirror and list all her attributes as though she’s reminding herself of what she looks like. In my contemporary wedding romance, If I Say Yes, my female lead, Shell, describes her sister and explains how the other girl looks similar to her—and also how they differ—thus telling the reader what they both look like. Here’s that scene:

“...Our eyes are on the same level because we’re roughly the same height. That’s where the similarity ends. My little sister’s hair, unlike my sleek, straight tresses, is naturally wavy and is tied in a high pony-tail, stretching her milky-white skin tight across her oval-shaped face. She’s starting to look more and more like Amma—that’s what we call our mums—as she approaches adulthood. Although my skin is also considered fair, mine has a yellowy undertone to it.

I don’t have her killer cheekbones, and my face is narrower than hers, my frame slimmer. Whereas Shayla has inherited a lot of Amma’s facial features, I’m more reminiscent of my dad—Abba.”

Although Shell is almost listing their attributes, she’s doing it in a context that makes sense—don’t we often compare ourselves to others? Aren’t people always making comparisons between siblings and how they do or don’t look alike? Isn’t that always in our heads? And this section is serving multiple purposes—describing the two women that are in the scene and two that are not, i.e. describing most of Shell’s family to the reader.

Remember, the audience expects you to paint a picture of your characters for them, but you don’t have to do it the same way in every book. I had two other POVs in this book, Seb and Imran, and either of them could have described Shell’s physical attributes, as in hack no.1, but I wanted to do something different, mix it up.

<3> Use sprinkles
(sprinkles, get it? Mixing, cake mix, sprinkles on the frosting? No? Yeah, not my best transition. Sorry.)

Instead of writing a paragraph where you go through all the individual features of your MC, sprinkle in those details over the course of the opening chapters (depending on how long those chapters are, of course—if your chapters are really long, you might be able to sprinkle everything in by the end of chapter 1). But in different contexts/settings. Gradually build up a picture of your protagonist.

Your MC is really short? Maybe they have to crane their neck up when saying hello to their extremely tall neighbour as they leave for work (and you can chip in their actual height here if you want, like, “Ugh, people that are barely four feet tall should not be neighbours with men that are almost seven feet!”)? Or if they’re really tall, maybe their neighbour looks like a child in comparison?

The MC has light blonde hair? Perhaps they pass someone on the street with gold-blonde hair and compare their tresses to that stranger’s?

Brown eyes? What if the handbag/briefcase they place on their desk when they arrive at the office is almost the same shade of brown?

You see what I’m getting at.

I used this sprinkling method in the opening scenes of Heir to the Throne to describe my key characters. I can’t put an excerpt of it here as it would make this article too long, but you can read an extended sample of this book for free if you sign up to my newsletter to get an idea of what I mean. Or you can download the entire thing if you’re interested in this new epic fantasy trilogy; my books are available at:

Thank you very much for reading this post; I hope you found this helpful.
Posted by Neha Yazmin at 19:29

Email ThisBlogThis!Share to TwitterShare to FacebookShare to Pinterest
Labels: #WriteTip

When Life Imitates Art ~ An author's tale (Part I)

Sitting Pains Imagine writing when it kills you to sit down. When your lower back aches and throbs, feels sore. Burns . When it feels...

Neha Yazmin
Neha Yazmin graduated from University College London (UCL) with a degree in Psychology and now lives in London. She writes both contemporary romance and paranormal romance/urban fantasy. Her debut novel, Soulmates Saga, Book 1, was first published in summer 2012. Neha is currently working on a number of projects.